John Wick: Chapter 3 – Parabellum (2019) showcases some lush visuals, a cheeky sense of humor, and, most importantly, coherent and intricately-choreographed fight sequences. Nevertheless, the 2014 original remains the best in the series because of its crisp pacing (it’s still the shortest entry) and simple, but effective, characterization. For me, the small pleasure of watching Keanu Reeves kill someone with a book outweighs the other, grander set pieces on display in Parabellum. The sequels have become bogged down in their increasingly elaborate world-building and have lost sight of the original’s nimble style and wit. Alas, John Wick has become Marvel-ized.
at June 13, 2019 No comments:

By Thomas Puhr
If a precocious, 15-year-old D&D enthusiast was force-fed LSD and given carte blanche to make any movie they wanted, the end product might look something like Panos Cosmatos' latest. Mandy is visually gorgeous, but it is Nicolas Cage’s performance as Red Miller, a man seeking revenge against the cult that murdered his beloved Mandy (Andrea Riseborough), that seals the deal. Though gloriously unhinged (especially when his enemies’ heads start rolling), Cage also imbues his character with genuine pathos. The late Jóhann Jóhannsson’s score, finished shortly before his death, does not disappoint. In short, Mandy is off-the-wall crazy and often exhilarating.
at January 17, 2019 No comments:

By Thomas Puhr
Quietly released in early 2018, Alex Ross Perry’s Golden Exits is the type of film that easily gets overlooked this time of year. An ode of sorts to Rohmer, the writer-director’s latest follows the intersecting lives of some New Yorkers, all of whom are connected in some way to visiting Australian, Naomi (Emily Browning). This may be Perry’s “warmest” film to date, but his trademark, acidic dialogue is still on full display. Most rewarding are the subtle parallels that emerge between the older and younger characters, as if the latter are looking at their potential future selves in a mirror.
at December 01, 2018 No comments:

By Thomas Puhr
Despite David Gordon Green’s considerable skills behind the camera and John Carpenter’s stamp of approval, Halloween (2018) cannot escape the clutches of fan service (multiple lines and shots are directly lifted from the 1978 classic). Ironically, the film is most successful during its comedic scenes; cowriter Danny McBride’s touch can be felt in much of the dialogue, especially during a vulgar rat-a-tat between a teenage girl and the little boy she is babysitting. Such moments are more than welcome. After all, Carpenter’s original has its fair share of strange humor. Green and McBride forgot one crucial element, though: genuine scares.
at November 09, 2018 No comments:

In his fourth feature film, Jeremy Saulnier applies his interest in elemental storytelling (simple motifs of darkness vs. light, revenge, etc.) to a much larger narrative canvas. Famous wolf tracker Russell Core (an understated Jeffrey Wright) travels to Alaska for a job and is embroiled in a sometimes overstuffed plot that tackles parenthood, Native American identity, mysticism, and war in the Middle East, among other things. Perhaps a bit overambitious for its own good, Hold the Dark (2018) nevertheless has its fair share of mesmerizing sequences, especially a remarkable shootout that showcases all of the director's compositional and tension-building finesse.
at September 29, 2018 No comments:


Joachim Trier’s Thelma (2017) adds a supernatural twist to his usual humanistic technique. It opens intriguingly enough, with a booming, Scanners-esque score by Ola Fløttum and a startling scene in which a father contemplates killing his young daughter, Thelma (played as an adult by Eili Harboe). The girl, we learn, has dangerous powers, which reemerge when she becomes attracted to a college classmate, Anja (Kaya Wilkins). The relationship between these two women is the film’s strongest element, but Trier instead focuses on the origins of Thelma’s psychic powers in the film’s latter half, which spoils some of the premise’s mystique.
at May 15, 2018 No comments:


Accidence (2018) immediately demands multiple viewings. Presented as a single shot that merges live action and unobtrusive animation, the short chronicles the goings-on of an array of apartment building tenants whose paths intertwine in unexpected and surreal ways. The stories on dollhouse-like display range from the banal (a man sleeping on his balcony), to the dramatic (a murder), to the bewildering (a man investigating shadows through a window). Maddin, Johnson, and Johnson merge the beginning and end (a clock in the central room proves key) so that the film, like a mesmerizing ambient album, could seemingly repeat itself into eternity.
at February 20, 2018 No comments: 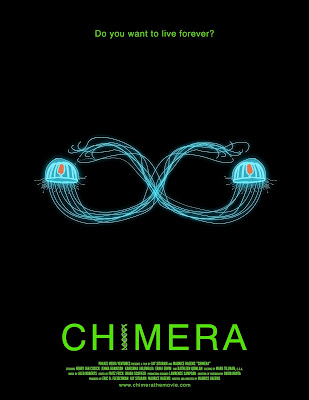 By Thomas Puhr
Like its conflicted protagonist, Maurice Haeems’ Chimera (2018) suffers from a bit of an identity crisis. On the one hand, it is a cerebral piece of speculative science-fiction: Henry Ian Cusick (playing it straight) is Quint, a scientist who freezes his children while searching for a cure to their life-threatening illness. On the other hand, it is a gleefully over-the-top ode to B-movies: Kathleen Quinlan (hamming it up) costars as Masterson, a mysterious woman funding Quint’s experiments in hopes of reviving her husband. Some wild shifts in tone make Chimera uneven yet unpredictable. Its final third packs an undeniable punch.
at February 15, 2018 No comments:

By Thomas Puhr
Daniel Day-Lewis gives a quietly intense and vulnerable performance as Reynolds Woodcock, an obsessive fashion designer, in what will be his final film. There is much to admire here, from the sumptuous costume design, to a hedonistic, almost surreal New Year’s Eve party, to some beautiful footage of Woodcock’s reckless nighttime drives (Anderson is the uncredited director of photography). The film’s second half, detailing the protagonist’s unconventional relationship with his muse/wife, Alma (Vicky Krieps), is its most engaging, especially when the writer-director dips ever-so-slightly into supernatural territory. Ultimately, like its central character, Phantom Thread remains aesthetically fascinating but emotionally remote.
at February 01, 2018 No comments:

Maureen (Kristen Stewart, in an eye-opening performance), a part-time clairvoyant and full-time personal shopper for a spoiled celebrity, obsessively searches for a sign from her deceased brother in Olivier Assayas’ enigmatic Personal Shopper (2016). Though the film does showcase some supernatural imagery, it is most intriguing as a character study. As Maureen stalks the empty rooms of what was her twin’s house, tiptoes around her perpetually-absent boss’ lavish apartment to update it with the latest couture and jewelry, and has an increasingly-disturbing text dialogue with an unknown number, one realizes she is just as much a ghost as her brother.


A gay couple (Sean Teale and Tom Bateman) staying at a bread and breakfast play a dangerous game of cat-and-mouse with its homophobic proprietor (Paul McGann) and another guest (James Tratas), who they suspect is a “basher.” Writer-director Joe Ahearne takes this premise, which initially feels like a setup for some gore-fest, and moves it in some unexpected directions; think of a DePalma-esque psychosexual thriller crossed with a tragic morality play. Once the final twist has settled in, one is left with the bleak impression that those living double lives may sometimes be more imprisoned than those literally behind bars.
at October 21, 2017 No comments: 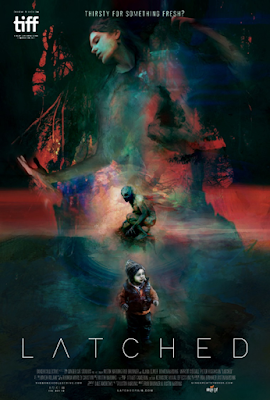 By Thomas Puhr
Within its crisp 17-minute runtime, Justin Harding and Rob Brunner’s Latched (2017) pulls off an impressive feat. Deftly combining elements of drama, folklore, and all-out horror, this short follows single mother Alana (Alana Elmer), who retreats to an isolated cabin for creative inspiration only to find herself the unwitting harbinger of a murderous fairy from the surrounding woods. The conceit behind the fairy’s reawakening is both perverse and darkly humorous, and the practical effects for the creature are top notch. Vivien Villani’s sweeping, orchestral score helps create a gothic-tinged atmosphere for what could have been a tasteless exercise in gratuity.
at September 19, 2017 No comments:


Amy Miller’s eye-opening Tomorrow’s Power (2017) begins with a shocking hospital scene in Gaza, wherein surgeons are interrupted mid-operation by a power outage. All they can do is wait in the dark and hope the lights return as soon as possible. This emergency, we learn, is a common occurrence in Gaza. Miller’s globe-trotting documentary further chronicles the energy crisis in terms of oil exploitation in Colombia and coal plant deforestation in Germany. Most engagingly, she discards the usual voiceovers, academic commentators, etc. in favor of having those actually affected by these crises tell their own stories, in their own words.

A cocktail of screwball comedy, coming-of-age drama, and family mystery, The Song of Sway Lake (2017) perhaps tries to be too many things at once. Its first third is its most lighthearted and successful; audiophile Ollie (Rory Culkin) and his wayward companion Nikolai (Robert Sheehan, who delivers some creative one-liners with gusto) crash the former’s family estate in search of a priceless, nearly-mythical record. These early misadventures provide many genuine laughs, but director Ari Gold’s detours into darker family drama feel abrupt and unnecessary. Nevertheless, the film has a big heart and undeniable charm (not to mention a lovely soundtrack).

An unnamed man and woman (Todd Bruno and Aniela McGuinness) abduct and torture a suspected rapist (Mike Stanley) as part of an ill-conceived plot to extract a confession. Writer-director Lou Simon’s 3 (2016) takes what at first seems a straightforward premise and cleverly shifts the character dynamics so that each person, at one point or another, seems to be both the hero and villain. The small cast and spare setting lend the film a theatrical atmosphere, and Simon wisely avoids excessive gore in favor of psychological tension. The twist ending, though unexpected, doesn’t mesh convincingly with the film preceding it.